What are the main uses of graphite? Graphite applications 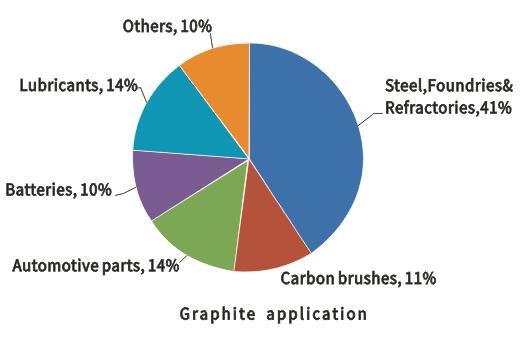 Applications of Graphite is mostly used in pencils, steelmaking, expanded graphite, brake linings, batteries, foundry facings and lubricants.
► Refractory Materials
On account of its high-temperature stability and chemical inertness, graphite is the perfect candidate for refractory material. It is used in the production of refractory bricks as well as “Mag-carbon” refractory bricks (Mg-C). In addition, graphite is used to produce crucibles, ladles, and molds for holding molten metals. Moreover, graphite is one of the most basic materials used in the production of functional refractories for the continuous casting of steel.
In the production of iron, graphite blocks are used to produce a portion of the lining of the blast furnace. Their structural strength at high temperature, thermal shock resistance, high thermal conductivity, low thermal expansion, and good chemical resistance are highly important in this application.
The electrodes used in many electrical metallurgical furnaces are mass-produced from graphite, for instance, the electric arc furnaces used for processing steel.
►Chemical Industry
In the chemical sector, graphite is employed in many high-temperature applications, like in the production of phosphorus and calcium carbide in arc furnaces. Graphite is used as an anode in specific aqueous electrolytic processes such as the production of halogens (chlorine and fluorine).
►Nuclear Industry
Large amounts of high-purity electrographite are used for producing moderator rods and reflector components in nuclear reactors. The suitability of electrographite comes from its low absorption of neutrons, high thermal conductivity, and high strength at higher temperatures.
►Electrical Applications
Graphite is mainly used as an electrical material in the manufacture of carbon brushes in electric motors. Here, the component’s service life and performance largely depend on grade and structure.
►Mechanical Applications
Graphite is widely used as an engineering material across a variety of applications such as piston rings, thrust bearings, journal bearings, and vanes. Carbon-based seals are used in the fuel pumps and shafts of several aircraft jet engines.
﻿