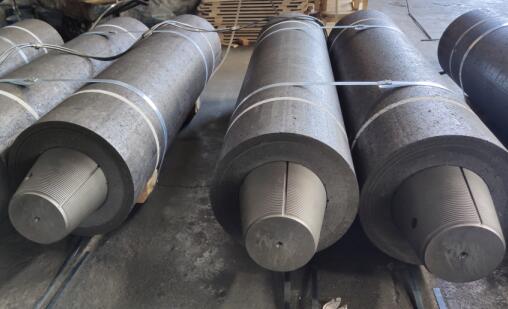 The properties of graphite electrode include low resistivity, high volume density, high mechanical strength, small linear expansion coefficient, excellent oxidation resistance.
► Graphite electrode properties
The working principle of graphite electrode is to initiate an arc between the electric extreme and the steel in the furnace, thus producing a high temperature as a heat source to make steel by melting the charge. It can also be used for smelting a variety of other metal materials.
1) High mechanical strength, low electrical resistance.
2) Good thermal conductivity and low thermal expansion coefficient.
3) Easy for processing, low material consumption.
4) Anti-oxidation treatment for longevity.
5) High-purity, high-density, strong chemical stability.
6) High machining accuracy, good surface finishing.
7) Resistant to cracking & spalling.
8) High resistance to oxidation and thermal shock.
► Property of graphite used in making electrodes
The name graphein comes from the Greek word for "to write". Named by The German chemist and mineralogist A. G. Werner in 1789. Graphite is a allotrope of the element carbon, in which three other carbon atoms (arranged in a honeycomb of hexagons) are covalently bonded around each other to form covalent molecules.
Graphite is a non metal, which is a physical form ( allotropic form) of carbon element. It is the only non metal that can conduct electricity ( that is allow the electric current to pass through it) because large amount of electron delocalization takes place within the carbon layers, which are present in the graphite. The valence electrons present in graphite can move freely and therefore, they can conduct electricity. As electrodes also allow the electric current to pass through them ( that is made up of good conductor) in electric cells, therefore, graphite is used for making electrodes in electric cells.
The physical properties of graphite
1) Graphite has a high melting point, similar to that of diamond. In order to melt graphite, it isn't enough to loosen one sheet from another. You have to break the covalent bonding throughout the whole structure.
2) Graphite has a soft, slippery feel, and is used in pencils and as a dry lubricant for things like locks. You can think of graphite rather like a pack of cards - each card is strong, but the cards will slide over each other, or even fall off the pack altogether. When you use a pencil, sheets are rubbed off and stick to the paper.
3) Graphite has a lower density than diamond. This is because of the relatively large amount of space that is "wasted" between the sheets.
4) Graphite is insoluble in water and organic solvents - for the same reason that diamond is insoluble. Attractions between solvent molecules and carbon atoms will never be strong enough to overcome the strong covalent bonds in graphite.
5) Graphite conducts electricity. The delocalised electrons are free to move throughout the sheets. If a piece of graphite is connected into a circuit, electrons can fall off one end of the sheet and be replaced with new ones at the other end.
﻿