In the process of electric arc furnace steelmaking, the melting point of the copper electrode is 1083℃, and the instantaneous temperature of discharge can reach 1100℃. The copper electrode is easier to wear, while the graphite will sublime at 3550℃, so the graphite electrode is easier to bear At the same time, it can achieve smaller electrode loss.
1) High temperature resistance: The melting point of graphite is 3850±50℃, and the boiling point is 4250℃. Even if burned by ultra-high temperature arc, the weight loss is very small and the thermal expansion coefficient is also very small. The strength of graphite increases with the increase of temperature. At 2000°C, the strength of graphite doubles.
2) Electrical and thermal conductivity: The conductivity of graphite is one hundred times higher than that of general non-metallic mines. Thermal conductivity exceeds that of metal materials such as steel, iron, and lead. The thermal conductivity decreases with increasing temperature, and even at extremely high temperatures, graphite becomes an insulator.
3) Lubrication: The lubrication performance of graphite depends on the size of the graphite flakes. The larger the flakes, the smaller the friction coefficient and the better the lubrication performance.
4) Chemical stability: Graphite has good chemical stability at room temperature, and can resist acid, alkali and organic solvent corrosion.
5) Plasticity: Graphite has good toughness and can be rolled into very thin flakes.
6) Thermal shock: Graphite can withstand drastic changes in temperature without being damaged when used at room temperature. When the temperature changes suddenly, the volume of graphite will not change much and no cracks will occur.

Graphite Electrode is composed of body and nipple. 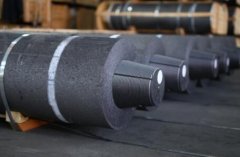